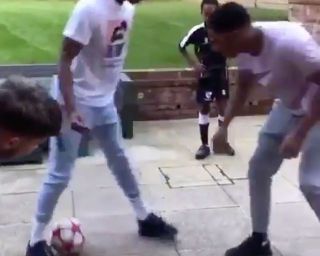 Marcus Rashford was in the mood on Sunday as he showed off his skill before helping Man Utd to a 3-1 win over Brighton at Old Trafford.

The England international wrapped up the victory with the third goal just after the hour mark, with the three points lifting the Red Devils up into seventh place in the Premier League table ahead of the international break.

However, it appears as though Rashford was feeling it even before the game, as he posted the video below on his Instagram page showing how he ended his own brother with a filthy nutmeg in a kick around in their garden.

You have to feel for his sibling as not only has he been completely done by the nutmeg, but then Rashford has put it out for all of his followers to see too just to rub it in a little bit more.

Nevertheless, it must of been a happy household over the weekend as Man Utd got back to winning ways and Rashford was on the mark to register his ninth goal of the season after 17 outings.

No one's safe from a Marcus Rashford nutmeg ?

Sorry bro but the practice came in handy today 😅 @danerashford