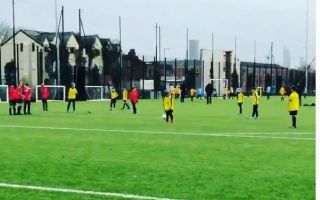 It still takes a bit of getting used to when you see the son’s of great players starting to show some promise. it’s inevitable that they will start to get pressure heaped on them due to the family name, but it will probably open some doors for them too.

The Rooney name has been in the news recently for a variety of reasons, mainly non football, so it’s brilliant to get back to talking about a brilliant goal from Rooney, even if it is his son.

This video appeared on Instagram of him scoring a cracking free kick, it’s just a shame about the celebration:

There was some talk recently about Kai Rooney signing for Man City’s academy team but it’s not clear if that will actually be happening.

Fans of Wayne should get to see his intriguing return to English football when he joins Derby in January. It might be worth getting his son to teach him some free kick technique first.