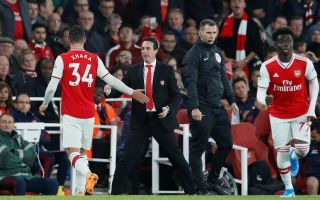 Former Arsenal midfielder Patrick Vieira has backed both Granit Xhaka and Unai Emery after recent troubles for the Gunners on and off the pitch.

A run of just one win in their last five Premier League games has contributed to the north London giants slipping to sixth place in the table.

SEE MORE: ‘He’s one of the best in the business’ – Merson advises Arsenal to replace Emery with Premier League boss

That now leaves them eight points adrift of fourth-placed Manchester City, as they are seemingly running the risk of missing out on Champions League football again this season.

That in turn has led to question marks being raised over Emery’s position as Arsenal boss, with The Sun noting that the Spanish tactician may have until January to convince all concerned that he’s still the right man for the job at the Emirates.

Meanwhile, former club captain Xhaka hasn’t featured for the Gunners since he stormed off the pitch after being jeered by Arsenal fans in the clash with Crystal Palace last month, with BBC Sport quoting Emery when he conceded that he wasn’t sure if the Swiss international would play for the club again.

Vieira though has defended the pair from criticism and while he has insisted that Xhaka can come back and prove his quality for Arsenal, he believes that Emery should also be afforded time to get things back on track for the Gunners.

“I think we have to remind ourselves that he’s [Xhaka] achieved a lot since he’s at Arsenal and he deserves a lot of respect,” he is quoted as saying by Sky Sports. “I find it really difficult a lot of ex-footballers have jumped on him and being really negative towards him – it’s too too easy.

‘I think it is a club that’s going through a really difficult period.

It remains to be seen if Emery gets that time to put things right at Arsenal, as ultimately it will depend on results and whether or not there is an upturn in form in the coming weeks to suggest that he can steer them back towards claiming a seat at Europe’s top table again.

Vieira is fully aware of what it takes to succeed at Arsenal and enjoy success having won six major trophies during his nine years in north London, although as noted by Sky Sports above, he went on to play down any suggestions of imminently wanting a return to England as a manager.