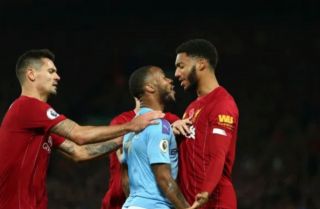 Raheem Sterling and Joe Gomez have dominated headlines to start the week as their spat rumbled on after reporting for England duty.

The pair were seen clashing during Liverpool’s win over Premier League title rivals Manchester City at Anfield on Sunday, with tensions running high between the two sides.

SEE MORE: What Raheem Sterling said during spat with Joe Gomez while on England duty

On Monday night, the FA confirmed that Sterling wouldn’t feature against Montenegro in their EURO 2020 qualifier later this week after reports emerged of an altercation between him and Gomez at the England training ground earlier in the day.

However, Sterling has since taken to Instagram to insist that the pair have put their clashes behind them and have moved on, accepting that it was in the heat of the moment and that emotions got the better of them.

That hasn’t stopped further reports from noting what was allegedly said between the pair during the encounter on Sunday though, with Sterling said to have warned his compatriot during their exchange at Anfield.

It’s added that Gomez responded by saying ‘come on’, before the pair are separated and the situation is diffused.

Time will tell if they clash again in the future as Liverpool and City remain locked in another thrilling title race this season, but it’s Sterling who will pay the price by missing out against Montenegro, while it remains to be seen if Gareth Southgate calls him back in for the encounter with Kosovo.