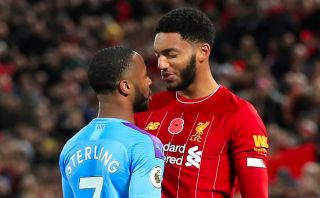 England have seen their preparations for their remaining EURO 2020 qualifiers disrupted this week after the spat between Raheem Sterling and Joe Gomez.

The pair initially clashed over the weekend in Liverpool’s 3-1 win over Premier League title rivals Manchester City at Anfield, with the duo separated after a spat on the pitch.

Now, Sterling will play no part against Montenegro on Thursday night as a result of a fresh row between the two England stars after they crossed paths having reported for international duty on Monday.

As noted by The Sun, Leicester City defender Ben Chilwell has revealed that they both apologised to the England squad for their bust-up, and it appears as though things have been sorted out quickly for the rest of the group to move on and focus on the task at hand.

“It got spoken about between the leadership group and Gareth. The decision has been made and we’re all very on board with that,” he told the media, as quoted by The Sun. “Since then it’s not been spoken of. It got squashed yesterday [Monday]. We’ve moved on and trained as normal this morning.

“Gareth spoke about the situation and spoke about what he thought, and he also wanted to know what we thought about it.

“Joe and Raheem got the chance to talk, which they both wanted to do. For Raheem, he wanted to apologise and Joe wanted to get stuff off his chest as well. That was it done then.

“[Sterling] was apologetic. He said it’s not in his nature, which it’s not. We all know as footballers that emotions can run high. There’s no-one trying to make excuses for him, including himself.”

Sterling took to Instagram on Tuesday to insist that the matter had been resolved between himself and Gomez, with emotions running high after a tense encounter on Merseyside.

In turn, Gareth Southgate will hope his side can get the job done over the course of the next two games and continue their impressive qualification campaign, while time will tell if he recalls the Man City ace for the clash with Kosovo on Sunday.