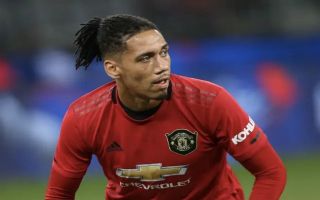 Chris Smalling has confessed he misses Manchester United, but is “really enjoying” his season-long loan spell in Serie A with Roma at the moment.

Smalling completed a loan switch to Stadio Olimpico on August 30, after falling down the pecking order at Old Trafford under Ole Gunnar Solskjaer.

The English centre-back found first-team opportunities limited at United after Harry Maguire’s arrival from Leicester City over the summer and was soon deemed surplus to requirements.

Smalling can return to Manchester to fight for a place in Solskjaer’s line up at the end of the season, but he may also have the option to remain in Rome if he continues to impress.

The 29-year-old has featured in ten matches for Roma across all competitions this season, scoring once, while helping the team fight for a spot in Serie A’s top four.

Smalling has already endeared himself to Stadio Olimpico supporters with a string of stellar displays, but he does still find himself feeling a bit homesick.

“I do [miss Man Utd] because I was there for so many years and I was used to be being part of the furniture there,” the experienced defender told talkSPORT.

“But I am enjoying my new chapter, and hopefully I can keep affecting performances on the pitch and we can have a successful season.

“But right now I’m really enjoying being in Italy.”

Smalling has adjusted quickly to his new surroundings in Italy, despite facing the daunting task of learning a new language while integrating with a whole new group of players.

He has fared admirably so far, with England boss Gareth Southgate even opening the door for the United ace to return to the international fold in the near future – as per Sky Sports.

Smalling has impressed since moving to Roma

Smalling is determined to block out any distractions, however, with his sole focus on helping Roma return to the Champions League.

“I’m starting to pick up things the manager is saying in Italian, and even with the players I’m lucky as quite a few of them speak English,” he added.

“I’m definitely picking up a lot of football phrases and a lot of basic phrases that are helping me interact with the team on and off the pitch.

“I am feeling very settled; my family is over here and the dogs are over here, so everyone is settled. When my family are happy and I am happy it shows on the pitch.

“Overall I can’t ask for much more in terms of my stay, which has been short so far, and at the minute my focus is on making sure this team has a settled season.

“The manager’s targets are not just about getting back in the Champions League – it is about winning something.

“That is where my full focus is, and come the end of the season when we’ve won something and achieved something we can see where it goes.

“Right now it is all about focus on the pitch.”