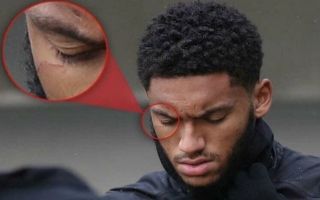 The first pictures of the scratch Joe Gomez suffered to his eye after an altercation with Raheem Sterling on England duty has now surfaced online.

As per the Daily Mail, Manchester City winger Sterling is alleged to have grabbed Liverpool defender Gomez by the neck after arriving at the Three Lions’ canteen at St George’s Park on Monday.

The two men squared up to each other during a Premier League clash between the Reds and City at Anfield on Sunday, which the home side won 3-1.

Tensions obviously bubbled over into the England camp at the start of the week, leading to Gareth Southgate dropping Sterling from his squad for Friday’s Euro 2020 qualifier against Montenegro.

The first image of Gomez’s nasty eye injury has now been released, with the 22-year-old clearly coming off worse after the incident.

Check out some photos of the cut Gomez sustained below.

Here’s another angle on the Joe Gomez scratch pic.