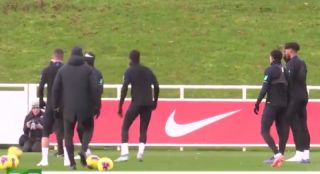 Manchester City and Liverpool stars Raheem Sterling and Joe Gomez have been spotted training together with the England national team.

You can see the pair involved in England training in the video clip below from the Daily Mirror, which follows the duo’s recent scraps during the Premier League game between Liverpool and City at Anfield at the weekend, and then at the St George’s Park canteen.

It remains to be seen if the players can fully put this behind them now, with their tempers clearly not calming since their initial clash on Sunday evening.

England fans will certainly hope this can be the end of the saga, with the national team needing everyone to be united and to be able to put club rivalry aside for the good of the country.