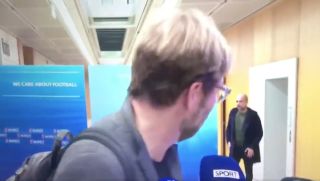 Jurgen Klopp has revealed that he’s since spoken to Man City boss Pep Guardiola following Liverpool’s 3-1 in over the Citizens at Anfield on Sunday.

The Reds moved eight points clear of their rivals following their win on Merseyside last weekend, with tension seeming rife during and after the match due to some controversial decisions that went in LFC’s favour.

“Pepe, who is Pepe? Pep Guardiola is coming!”

However, it seems like this hasn’t ruined Klopp’s relationship with the Spaniard, as he confirmed yesterday that the two have since spoken following the match.

It’s nice to see Klopp and Guardiola haven’t fallen out over Sunday’s affair, and that the German is still happy to be usual jokey self around the City boss, as seen in the video above!