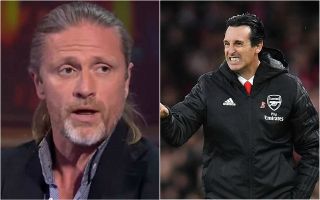 Former Arsenal star Emmanuel Petit has called on his old club to sack the struggling Unai Emery and replace him with a former player.

The Spanish tactician is struggling to live up to expectations at the Emirates Stadium, with the Gunners currently on a dire run of form with just one win from their last seven games in all competitions.

One imagines Arsenal will not put up with performances and results like this for much longer, but Petit is already convinced he’s seen enough to say Emery needs to go.

Petit played for Arsenal during one of their more successful periods under Arsene Wenger, winning the double with the north Londoners in 1997/98.

Writing for Paddy Power, as quoted by the Metro, the pundit now thinks some of his former team-mates could be ideal to take over from Emery.

He added: “People may laugh at me but I wouldn’t mind seeing a former player on the bench. Is there a former Arsenal great you can call, like Thierry Henry or Patrick Vieira? Pick one: there are so many. You even have Freddie Ljungberg already in the dugout.

“Patrick has done a very good job over two years at Nice, though you don’t know what’s going to happen at that club as they’ve just been bought out by Ineos and Jim Ratcliffe. So we’ll need to wait a few months to see what’s going on there.”

It remains to be seen if Arsenal would take such a gamble on these relatively inexperienced names, though most fans would probably rather almost any change right now after the dire football being served up by this team.