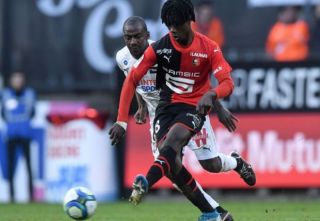 Manchester City is ready to go to war with any other club that is looking to sign 17-year old Stade Rennais midfielder Eduardo Camavinga.

The young Frenchman has made 13 appearances for Stade Rennais this season and although he hasn’t managed to score yet, his performance against Paris Saint Germain, which included a game-winning assist, impressed many.

As reported by 90min, reigning Premier League champions Manchester City have now entered the fray to bring the talented midfielder’s skills to the Etihad.

Camavinga signed a new three-year deal this summer so his current club will want and expect a big offer if they are willing to let their player go.

But with the money City have at their disposal, whatever amount Stade Rennais are asking for should be no problem for Guardiola’s side.

Also, per The Mirror, City’s biggest rivals Manchester United and FC Barcelona have both also expressed their interest in signing the £26m rater youngster.

Born in Angola, Camavinga has recently been granted his French citizenship, which will allow him to represent the world champions going forward.