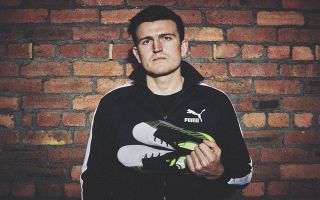 According to the Sun, Manchester United star Harry Maguire has signed a lucrative £700,000-a-year deal to wear Puma’s football boots.

The German apparel company tied down the defender to a deal despite interest from Nike, Adidas and Under Armour. The Sun also reiterated that the centre-back’s been wearing all-black boots since arriving at United in a record £85m deal.

Puma clearly believe that the world’s most expensive defender can get his stock to rise even further. Maguire has played every minute of every single Premier League game for the Red Devils this season.

Take a look at the 26-year-old’s social media post to announce his new agreement here.

Maguire seems to have settled in quickly at Old Trafford.

Maguire has certainly become one of the highest-profile defenders in the world since securing his marquee move to old Trafford this summer.

The giant defender – often called ‘slabhead’ by his teammates has also established himself as a crucial player in the England team under Gareth Southgate.

Whilst Ole Gunnar Solskjaer’s side haven’t been very impressive this season, Maguire’s managed to steady United’s defence a little since his arrival and he’ll be hoping to take his game to the next level with the Manchester outfit.