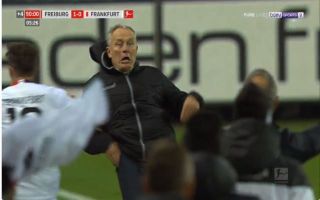 It’s still hard to figure out if this incident was hilarious or a bit of a shame for the manager involved. He was clearly trying to wind David Abraham up as he ran towards him, but he probably didn’t expect the Frankfurt man to steamroll him to the ground.

It seems that Abraham and the Freiburg manager Christian Streich have since made up with the manager admitting he maybe should’ve got out of the way.

A report from German outlet Kicker has indicated that Abraham will be allowed to keep the Frankfurt captaincy, but it looks like he will face a hefty fine and also looks set to be banned for the rest of the year.

The incident had little impact on the overall result as it happened in the last minute, but the scuffle in the aftermath was pretty impressive to see:

You won’t be surprised to hear his club are not appealing the decision…pic.twitter.com/OD5nqdqfzP

Streich’s face as he falls to the floor has already become a meme so the incident looks set to live on, but it does look like the clubs and those involved will be looking to move on from it.

Video: Frankfurt player sent off as he FLATTENS the opposing manager on the touchline November 10, 2019 19:31