If you ever needed a reminder of the ridiculous amounts of money involved in football these days, then the recent list of fines for Chelsea players shows you everything you need to know.

Players risk being fined thousands of pounds for some relatively minor offences, but it’s still unlikely to even make a dent in their bank balance if they do incur them: 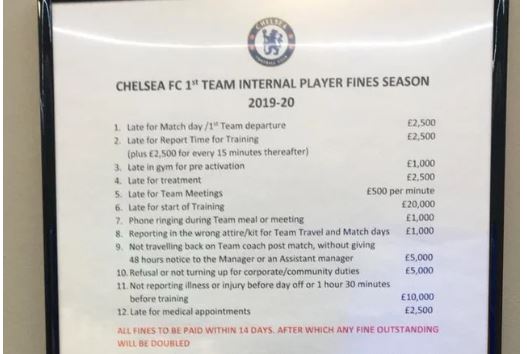 The “proper” rounds of the FA Cup from the weekend have reminded us all just how different the game is for non league players. It’s a pretty worn cliche about “giant killings” and playing against “plumbers and binmen” but it’s pretty likely that most players will have at least one other job when you get further down the ladder.

Blyth Spartans have recently taken to Twitter to highlight the stark differences between Chelsea’s fine list and their own. Obviously their players aren’t paying thousands of pounds in fines, but one particular offence did stand out:

Terrible that @ChelseaFC players can urinate in the shower and get away with it ?? #HowayBlyth https://t.co/IDsi7orKHp

The fact that there’s a fine written down for someone urinating in what we can all assume is a public shower should set alarm bells ringing, but it’s still interesting to see it’s only slightly cheaper than missing training.

It seems that Chelsea didn’t feel the need to come up with an amount for that offence in their list, but you can only imagine it would be one of the more expensive urinations in history.