Arsenal goalkeeper Emiliano Martinez has been spotted liking a post on Instagram calling for Unai Emery to be sacked.

The photo below even instructs users to hit ‘like’ if they want the Spanish tactician out at the Emirates Stadium. 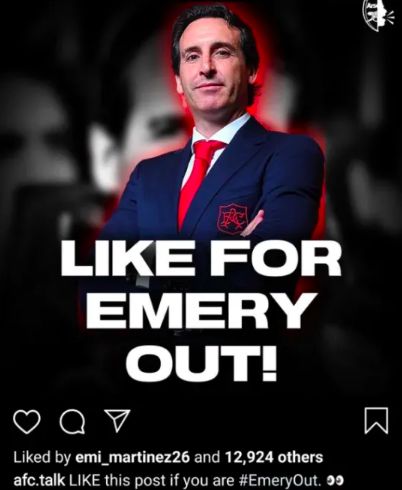 While this may have been a slip from Martinez, it’s quite possible that it’s not just the fans that are growing impatient with Emery after a poor run of form this season.

In general, the former Paris Saint-Germain and Sevilla boss hasn’t really done enough to look like the ideal long-term replacement for Arsene Wenger.

Both results and performances have been below par for much of his reign so far, and The Athletic have been among those to suggest the players are losing faith in him.