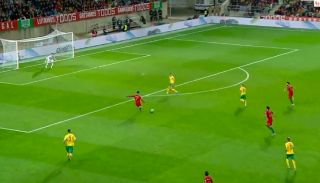 Cristiano Ronaldo has bounced back after a bit of a dip in form with Juventus to score a fine goal for Portugal this evening.

Watch the goal video below as Ronaldo thumps a beautifully curled effort into the back of the net to show Juve manager Maurizio Sarri what he can do.

Ronaldo has just one goal in his last five games for Juventus, and has been subbed off in each of his last two appearances for his club.

Still, the former Manchester United and Real Madrid forward is still class on his day, as he showed with the quality of this strike for his country tonight.

Just the 97th international goal for him! ? pic.twitter.com/Le4OzYDe2K