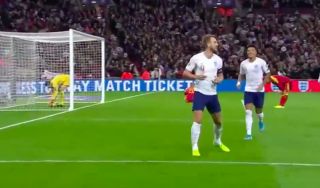 Harry Kane is having a great night for England as he managed a hat-trick against Montenegro before half time.

The Tottenham striker has been clinical for his country down the years and is now on to 31 goals in total for the Three Lions.

That puts Kane just 22 away from Wayne Rooney’s record, so it’s perfectly possible he’ll manage to overtake the former Manchester United star as the nation’s all-time leading scorer before his career is done.

For now, Kane is just punishing this woeful Montenegro side and may fancy a couple more in the second half.

Here are his three strikes so far…

Only five players have scored more.