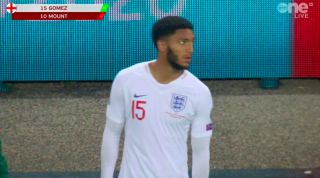 Several journalists have tonight claimed that Joe Gomez was booed by England fans when he was subbed on against Montenegro in this evening’s game.

The Liverpool defender notably clashed with Manchester City forward Raheem Sterling in their Premier League encounter last weekend, and it seems that wasn’t the end of it.

The Daily Mail and others have reported on the pair coming to blows in the St George’s Park canteen at the start of the international break too.

And despite there being no obvious reason to think Gomez is to blame, it seems some England fans weren’t too happy with him as he was brought on by manager Gareth Southgate tonight.

See the tweets from reporters below, with the Reds ace clearly doing something to upset Three Lions supporters in this whole saga.

Very strange reaction there… a smattering of boos when Joe Gomez came on. Bizarre. His behaviour has been impeccable after the bust-up. You could see Raheem Sterling clapping him from the stands when Gomez came on.

England 'fans' booing Joe Gomez? They do realise Sterling was in the wrong, yeah?

This is despite the Mail’s report suggesting Sterling blew up at him first, while Gomez has seemed to remain perfectly professional throughout.

It remains to be seen how Gomez will react to this, or if further details might emerge on why the crowd gave this bizarre reaction to the 22-year-old.