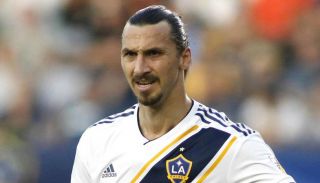 Zlatan Ibrahimovic confirmed that he is set to leave LA Galaxy in his own unique way on Wednesday, while it remains to be seen what’s next for him.

The 38-year-old will see his current contract expire at the end of December, which in turn had sparked plenty of speculation over what he could decide to do next.

Having bagged 53 goals in 58 games during his time with the MLS franchise, there is little doubt that he has shown he still has plenty of quality to offer and can perform at a high level.

As seen in his tweet below, he has now confirmed that he is set to move on and couldn’t resist taking a parting shot in his own humourous way by suggesting that Galaxy fans can now go back to watching baseball given he’s on the move elsewhere.

Although Ibrahimovic wasn’t able to add to his trophy collection during his time in the US, he undoubtedly made a big impression with his class on the pitch and will surely be a huge miss for the league.

Nevertheless, speculation is now rife about his future and what option he’ll choose to take next with Sky Sports noting that he could be set for a return to Italy with both AC Milan and Bologna possible options on the table for him.

Ibrahimovic knows Serie A well after previous spells with Milan, Inter and Juventus, and so perhaps that could be the smart move for him as having shown that he can still produce the goods, a return to Europe seems like the sensible option as he can still make an impact for a top side.

Time will tell though whether it’s a second spell with the Rossoneri or not, although they are surely in need of a player like Ibrahimovic given their struggles so far this season which have left them down in 14th place in the Serie A table after 12 games.