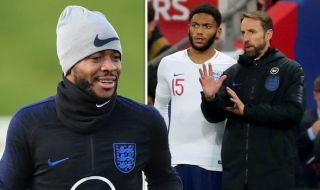 Manchester City star Raheem Sterling has issued a response on Twitter to England fans booing Liverpool defender Joe Gomez when he was subbed on by Gareth Southgate in the game against Montenegro.

The Daily Mail and others have reported on the high-profile spat between Sterling and Gomez that took place in the St George’s Park canteen after they initially also clashed on the pitch in the Premier League clash between Liverpool and City at Anfield at the weekend.

Sterling was clearly not happy to see Gomez being booed by some England fans this evening, and took to Twitter to take responsibility for the situation.

especially after a difficult week for him to be booed when he came on tonight was wrong.

I’ve taken full responsibility and accepted the consequence.
I felt as though I had to say this get home safe every one ?? #Euro2020

The 24-year-old explained that it was hard to see Gomez being treated that way after something he felt was his own fault, whereas the Reds ace has kept his head down and been professional throughout this saga.

This is a classy gesture from Sterling, and one certainly hopes Gomez will not lose the support of the England crowd for the long term.