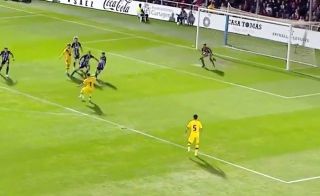 Barcelona were in action on Wednesday night as they secured a 2-0 win over Cartagena to keep themselves ticking over during the international break.

The Catalan giants sit top of the La Liga table after 12 games while they remain in a commanding position in Group F in the Champions League as they lead the way ahead of Borussia Dortmund and Inter.

With their next competitive game not until November 23 when they face a trip to Leganes, those who remained behind over the international break and mostly some of the club’s top youngsters were given a chance to get some minutes under their belt in midweek for a good cause as they raised money for the victims of the floods in Murcia in September.

Goals from Carles Perez and Alejandro Marques sealed the win, with the former producing a tidy finish to curl his effort into the back of the net, as seen in the video below.

The 21-year-old has struggled for playing time in recent weeks having emerged as a key option for coach Ernesto Valverde this season, as he has a goal and three assists in seven La Liga appearances to date.

He will have done his chances of a more prominent role moving forward no harm with this goal, which will perhaps have grabbed the attention of the Barcelona boss to give him a selection headache over giving Perez more opportunities after the international break concludes.

Barça are up 1-0! Carles Pérez, assisted by @RiquiPuig!