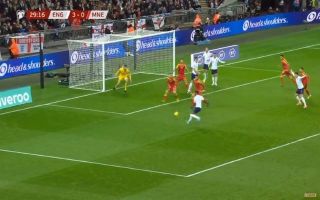 On first viewing this might look like a pretty simple finish, but it gives us a great indication of how much confidence plays a huge role in the form of Marcus Rashford.

Earlier in the season he might have slashed at this and sent it off target or into the defender, but he sells a nice dummy before powering a classy finish into the far corner:

??????? @MarcusRashford gets on the scoresheet for @England! pic.twitter.com/CP3X6st2pj

He’s been in great form for club and country in recent weeks, so Man United fans will be delighted to see him continue his goal scoring run.

A fit and firing Rashford paired with the returning Anthony Martial could be enough for United to start striking fear into opposing defences again.

As for England, it turns out they didn’t really need Raheem Sterling for this one anyway.