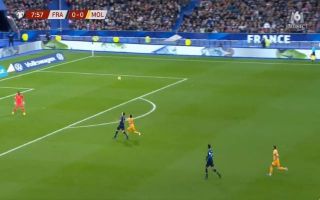 It would be an almighty shock if Moldova manage to hold on and beat France tonight. They’ve taken an early lead thanks to some fairly comical defending from Barcelona defender Clement Lenglet.

It’s really not clear what his plan is. He’s attempts some sort of keepy ups with his head as he runs towards his own goal and just gifts the Moldova player a goal with a woefully short back pass:

When you first see the clip it looks like he might actually deal with the long ball in an incredibly classy way by keeping control and then giving the ball to a teammate.

Then it starts to go horribly wrong, culminating with a sort of failed attempt to even stop the striker from scoring.

There’s still over an hour left, but this could be the greatest upset in France since James McFadden led Scotland to a heroic victory in 2007.