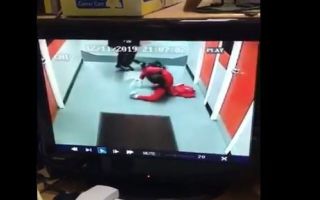 There’s nothing better than a cartoon style fall where someone starts to lose their footing only to end up in the air and landing on their backside.

This video has emerged of Airdrie goalkeeper David Hutton going flying in his own tunnel. Usually this would go unnoticed, but the club decided to release the video to the world to make sure everyone sees it:

WINTER SAFETY ANNOUNCEMENT | The Penny Cars Stadium cameras caught up with goalkeeper David Hutton yesterday, with an important reminder about the importance of appropriate footwear. pic.twitter.com/geVHc9DLkK

Anyone who’s played with know it’s always a bit unsettling when you take to a hard, shiny surface when wearing studs. Perhaps this will start a campaign for players to wear the proper footwear.