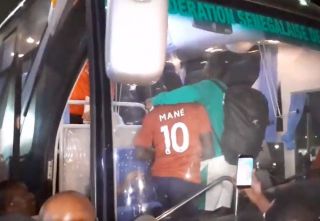 Sadio Mane was in action for Senegal this week as he helped them to a 2-0 win over Congo in their African Cup of Nations qualifier.

After the game, countless fans greeted the players as they tried to get on the team bus and head away from the stadium, but there was one fan in particular who caught Mane’s eye.

As seen in the videos below, the Liverpool star was busy giving interviews before he managed to finally get on the bus, only to spot a lookalike wearing a Liverpool shirt standing right in front.

After a brief exchange, the fan then managed to get invited onto the team bus and was seen taking pictures with the players as they seemingly thought it was hilarious.

It has to be said he isn’t exactly a spitting image, but he’s gone for the same hair style and chucked on the Liverpool top and managed to get himself a moment he won’t be forgetting any time soon having met his footballing heroes.