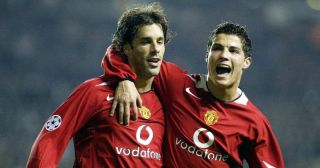 Louis Saha has revealed how Ruud van Nistelrooy once made Cristiano Ronaldo cry after a bust-up during their time together at Man Utd.

It’s a hot topic of conversation this week after Raheem Sterling and Joe Gomez were involved in an altercation while on England duty.

Another former Man Utd star Roy Keane revealed in midweek that he had his own clash with Peter Schmeichel while at United, as seen in the video below, as he argued that it’s just part of the game and most players experience it at some point.

It appears as though that is the case as Saha has now gone public with a story about how Van Nistelrooy and Ronaldo clashed while they were all at Man Utd.

“Did Ruud make Ronaldo cry? Yeah, there were stories because I think they ended up in an argument at the moment when Cristiano’s father had passed away, so it wasn’t the right moment,” he told Four Four Two.

“Things like that happen when two players have lots of spirit, but I’m sure Ruud regrets some of his words.”

It’s worth nothing that Saha didn’t suggest that Van Nistelrooy said anything about Ronaldo’s father, but perhaps the timing of the clash was poor as it would undoubtedly have been an emotional time for the Portuguese superstar who was still young when it occurred.

Nevertheless, it seems as though it was quickly put behind them, while Sterling has been eager to play the incident with Gomez down too and take responsibility for what happened between himself and the Liverpool defender after tensions and emotions ran high following the Liverpool-Man City clash on Sunday.

It’s likely the same thing happened here between Van Nistelrooy and Ronaldo, while Saha also went on to insist that he wasn’t part of the reason why the former Dutch international was offloaded by Man Utd despite seemingly still being a pivotal figure for them.

'I've had a fight with @Pschmeichel1 in the hotel. It was 4 in the morning, there weren't many people around…'