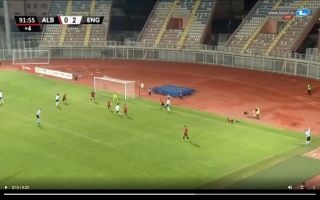 In the 92nd minute of this evening’s European Championships qualifier between England’s Under-21s and Albania, Arsenal’s Reiss Nelson rounded off a tidy performance from the Young Lions.

Nelson sparked a counter-attack by playing the ball into Tottenham star Ryan Sessegnon, the versatile ace charged down the right-wing before cutting it back to the Arsenal man.

Nelson showed his tidy footwork to take the ball past a defender before firing into the rood of the net from close range with a clinical finish.

Take a look at the 19-year-old’s superb effort, courtesy of Laola TV:

The 19-year-old has made six first-team appearances for the Gunners across all competitions so far this season.

Some fans will be hoping to see the ace playing with this much confidence and skill once the international break is over.