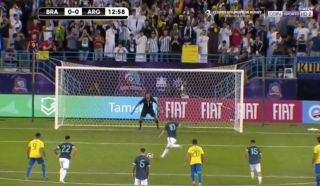 Lionel Messi’s patchy form from the penalty spot continued this evening, as he saw a spot-kick saved by Alisson before converting the rebound as he gave Argentina the lead vs Brazil.

The Albiceleste were awarded a spot-kick after Messi himself was fouled in the area, however the Barcelona man showed why some doubt his abilities from the spot, as he saw his effort saved by Liverpool shot-stopper Alisson.

Alisson saves Messi's penalty but can't stop him scoring from the rebound pic.twitter.com/7HTxEJK8vN

Luckily for the Barcelona man, the ball fell kindly to him after Alisson’s heroics, something that allowed him to tuck the ball home and give his side an early lead.