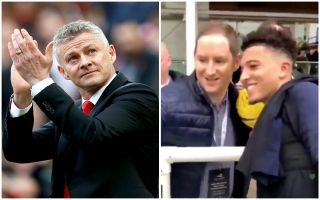 One Red Devils supporter asked the 19-year-old to “Please sign for United” and the Borussia Dortmund star laughed off the plea after taking a selfie with the fan.

According to the Metro, Liverpool, Manchester City, Real Madrid and Barcelona are all interested in the ace who is valued at a staggering £120m.

The Guardian understand that United are weighing up a move for the star after his recent troubles with Dortmund.

The ace was punished for returning to Germany late after the last international break and faced criticism from manager Lucien Favre last week.

Take a look at the United supporter’s plea to the tricky winger below:

A fan tells Jadon Sancho to “Please sign for United”

Give this man a statue if he signs ?? #MUFC pic.twitter.com/srEccV5CrF

Ole Gunnar Solskjaer is in serious need of bolstering his United squad, the Red Devils have a void at right-wing which Sancho’s signature would definitely fill.

The exciting youngster is establishing himself as an important player for the England team in the run-up to Euro 2020, the ace was very impressive in the Three Lions’ 7-0 win over Montenegro on Thursday night.

“I don’t like it, I hope it doesn’t happen” – Liverpool star James Milner fights to save football in superb post-match interview
More Stories Jadon Sancho