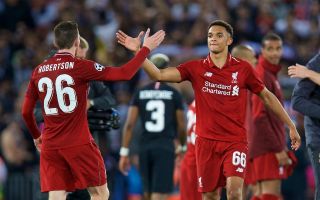 Both players are undoubtedly among the best in their respective positions and have all the attributes of modern-day full-backs. They have been integral to Liverpool’s attack through their runs down the flanks and brilliant crossing. Last season, Robertson and Alexander-Arnold had a combined 29 assists across all competitions and were named the PFA Team of the Year as well as in the Champions League Team of the Season.

In 2019/20, the duo have four assists each and have also found the net occasionally. While Robertson has two goals, Alexander-Arnold scored a stunning goal against Chelsea.

Gerrard hailed both players while speaking to the Liverpool Echo. As quoted by the Reds’ official website, the club’s former captain said: “What we have in Trent and Robbo now, straight away you would put them in the world-class bracket. The thing for Trent now is can he maintain that consistency for as long as he can? Because he can go on and be whatever he wants to be.

“What I would say is he is already there and we, as Liverpool fans, are blessed to have these two full-backs in the position because they are absolutely flying. They are so important and key to how Liverpool play and I just love watching them.”

Both Robertson and Alexander-Arnold have done well this season so far although the latter needs to be a tad more efficient defensively. They will be hoping to maintain their good run of form once club football resumes. Liverpool’s first match following the international break is against Crystal Palace next Saturday at Selhurst Park.