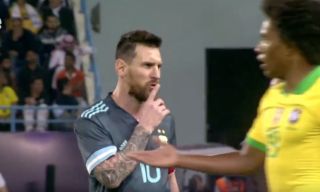 Brazil defender Thiago Silva was seemingly left less than impressed with Argentina talisman Lionel Messi after their meeting this week.

Argentina secured a 1-0 win over their rivals in an international friendly in Saudi Arabia, with Messi’s early goal all that separated the two sides as he pounced on his penalty being saved to convert the rebound.

However, there were incidents during the game which have left Silva feeling disappointed and annoyed with Messi it seems, namely the clash between the Barcelona icon and Brazil coach Tite.

As seen in the video below, Messi was spotted telling Tite to keep quiet, with the latter later telling reporters that it was a reaction in response to him calling for the 32-year-old to be booked, as per the Independent.

That clearly didn’t sit right with Silva, who slammed Messi for showing a lack of respect especially towards a coach while he wasn’t particularly happy with his rival’s action on the pitch in general either.

“It’s hard to understand when we talk about respect on the pitch, and one of the most admired players in the world does that, you don’t do that to an older person but being that it was a coach… as much as there is rivalry, respect has to come first,” Silva said, as quoted by Sport.

“He wanted to rule over the game. He kicked two people and the referee did nothing. I argued with the ref and he kept laughing. You have to put admiration to one side.

“He always looks to force the referee to give them free-kicks in dangerous areas, he always acts in that way. We spoke with some players who play in Spain and the same thing happens, he looks to control the game and the referee’s decisions.

“In the Champions League he doesn’t have that advantage because the referees are tougher. You don’t see him trying to rule so much. There are referees that, because of their admiration for him, start to weigh in on his side. That we didn’t have Neymar on our side was a disadvantage.”

Whether that is the case or not will be left for debate, but clearly Silva was irked by Messi’s actions in midweek and his frustration would have been compounded by the result.

He arguably makes a valid point about the respect towards a coach regardless of their protests from the sideline as that’s not something many people want to see from a global icon like Messi, but we’ve all seen countless players trying to speak with the referee to gain any sort of advantage possible and so perhaps that’s a more contentious view from Silva.

Either way, Messi and Argentina will be pleased with the result while Brazil will hope to bounce back the next time the two sides meet.