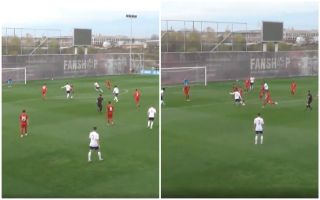 Manchester United starlet James Garner managed to get himself a quick-fire brace for England’s Under-19s against North Macedonia this afternoon.

In the 71st minute of the clash, Garner picked up the ball on the edge of the box before curling it into the corner. The keeper had no chance of stopping the 18-year-old’s effort.

In the 78th minute of the tie, Garner showcased his brilliant reactions by curling the ball into the bottom corner after one of his teammates saw their shot deflected.

Take a look at the midfielder’s excellent brace below:

His 2nd goal in the same match for England U-19’s pic.twitter.com/pLoZe9qG3b

Garner has made three first-team appearances for the Red Devils so far this season and Solskjaer should be keeping a close eye on him  after his impressive performance.