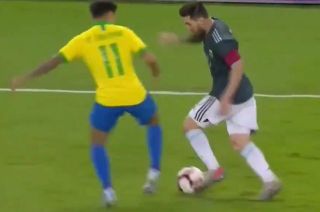 Philippe Coutinho is five years younger than Lionel Messi, and yet the Brazil international couldn’t quite keep up with the Argentina talisman this week.

Messi’s early penalty was the difference between the two sides in a 1-0 win, but there was also a key passage of play in the latter stages of the encounter which saw the two former teammates cross paths.

Coutinho is currently out on loan at Bayern Munich and it remains to be seen whether or not he returns for another spell with the Catalan giants, but he can still learn a thing or two from Messi it seems.

As seen in the video below, Messi firstly shows off some superb close-control and skill to get away from Coutinho before showing he still has the pace to get away from players as he leaves his rival behind before checking back and playing a pass to take three Brazil players out of the equation.

Considering this happened in the 79th minute, it just goes to show the level of quality and fitness that Messi is still operating at even at 32 years of age, and he’ll no doubt be delighted to help his country secure a win over their rivals regardless of the setting.