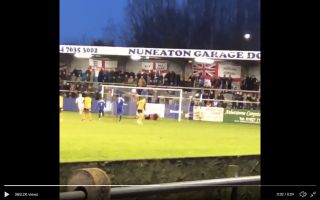 Nuneton Borough goalkeeper Tony Breeden may have produced the best moment of football this week after his awful penalty broke a stadium light earlier today.

Just over sixty minutes into today’s clash between Southern Central Premier Division side Nuneaton Borough and Stratford Town, Boro were awarded a penalty.

As per their official website penalty taker Luke Benbow was on the bench so goalkeeper Tony Breeden shocked everyone by running up and setting himself for the penalty.

Breeden had a moment to forget as his effort sky-rocketed over the bar and ended up hitting one of the floodlights that was hung up on the terrace.

Fortunately the penalty miss didn’t prove to be costly as Boro went on to win the clash 2-0.

Take a look at the bizarre spot-kick below:

Boro actually had another penalty later in the game and manager Jimmy Ginnelly urged Breeden to stay back, as per the club’s hilarious Twitter account.

Breeden also reflected on the moment in a light-hearted manner after the game, take a look at his tweet here.

“I don’t like it, I hope it doesn’t happen” – Liverpool star James Milner fights to save football in superb post-match interview
More Stories Nuneaton Borough