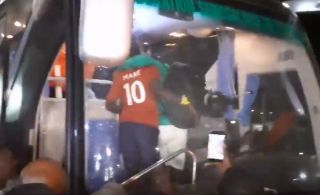 Liverpool star Sadio Mane got a bit of a surprise on the Senegal team bus as he was greeted by a lookalike of himself!

Watch the rather amusing video below as the Reds ace meets his double, before then inviting him onto the squad bus with him.

Since Mane is probably Senegal’s best player, there’s no doubt they could do with another one of him in the team.

That said, we imagine that, while this guy does look a lot like the Reds forward, he probably doesn’t share his footballing ability…