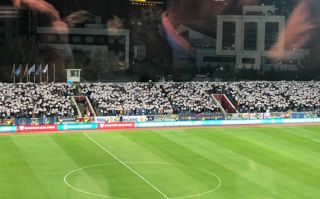 Kosovo fans put on some beautiful scenes ahead of their match against England today, as they held up England flags whilst the away side’s national anthem was being played just before kick off.

As seen in the picture below via John Cross, a large section of home fans showed their support and respect for Gareth Southgate’s side by holding up the St George’s cross during ‘God Save the Queen’.

When God Save The Queen was played, every Kosovo fan in the stadium held up a flag of St George #respect pic.twitter.com/rljpCrd9Xu

It was a truly heartwarming and lovely gesture from the Kosovo fans, who will’ve surely earned the respect of many Three Lions supporters following their actions this afternoon.

You just love to see it!