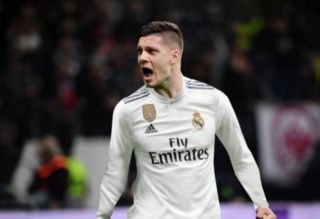 Real Madrid are ready to include summer arrival Luka Jovic in a huge player-plus-cash transfer offer for PSG and France superstar Kylian Mbappe.

According to Don Balon, Mbappe has emerged as the Spanish giants’ no.1 transfer target after the club’s interest in Neymar slowly died out, and now, it seems like the club are ready to go all in to land the Frenchman’s signature before anyone else.

As also stated in the report, Los Blancos are ready to offer Luka Jovic plus a fee between €200M and €250M for Mbappe, as they look to land one of the world’s leading superstars.

Jovic has failed to hit the ground running since his move to the Spanish capital from Eintracht Frankfurt this summer just gone, and now, it seems like his spell with the club could already be coming to an end.

The Serb has only managed to bag once for Zidane’s side thus far despite playing a part in 11 games in all competitions, an awful return for a player who was hyped up so much following his transfer in the summer.

Given how poor he’s been for Real so far, we’re sure their fanbase won’t mind them including Jovic in a deal for Mbappe as long as it increased their side’s chances of landing the Frenchman.

Mbappe has all the credentials to win many a Ballon D’Or in the future, thus it’s easy to see why Los Blancos are so willing to fork out loads in order to bring him to the Santiago Bernabeu in the near future.