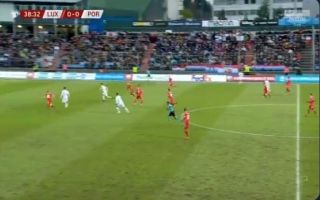 It did seem unlikely, but there were circumstances where Portugal would fail to qualify from their Euro 2020 qualifying group if they failed to beat Luxembourg this afternoon.

That was almost starting to transpire with Serbia beating Ukraine, while Portugal looked set to go in at the break with the score at 0-0. Step forward Bruno Fernandes to score a potentially vital goal.

READ MORE: Manchester United star accused by team-mate of once missing game because he “didn’t fancy it”

You do need to question the defending as one player seems to play the entire Portugal attack onside by about five yards, but Fernandes produced a thumping finish at the near post to put his team in front:

Keep the champagne on ice because It’s not Ronaldo…?

But out of absolutely nowhere, Portugal have taken the lead through this superb strike from Bruno Fernandes!

We’re so used to seeing Cristiano Ronaldo being the player to rescue Portugal in these situations, so it’s refreshing to see somebody else stepping up.

It could be interesting to see how much longer Fernandes stays with current club Sporting Lisbon. A recent story from the Manchester Evening News noted the long-running summer interest in him from Manchester United, as well as others like Real Madrid.

He might be expensive, but he could be a huge signing for Ole Gunnar Solskjaer’s side if they were able to pull it off. He’s a proven goal-scoring and creative threat who can play as a box-to-box midfielder or further forward, and looks like he’d surely be an upgrade on the off-form Jesse Lingard.

Real Madrid could also so with some midfield reinforcements. Luka Modric is getting older and will need to be replaced at some point. Federico Valverde has proven he could step up for them in the future, but Real are obsessed with making big-name signings and might turn to Fernandes next summer instead.

If he keeps doing this for club and country then his price tag will keep rising.