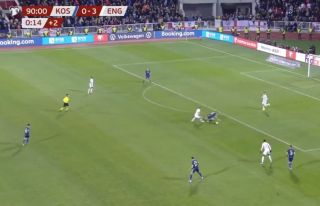 Chelsea midfielder Mason Mount scored his first ever goal for the England national team this evening, as he scored late on against Kosovo following a defensive howler from the Three Lions’ opponents.

Having scored their third about 10 minutes earlier, Southgate’s side soon managed to find a fourth against Kosovo via Blues man Mount.

Whilst trying to play it out from the back, one of Kosovo’s defenders slipped, giving the ball to Kane, whose pass to Mount allowed the Chelsea star to slot home with ease.

A moment to remember for the Blues man!