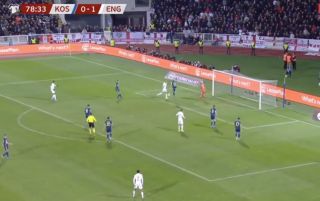 Harry Kane scored for England yet again this evening, as he bagged a typical striker’s goal to hand the Three Lions a 2-0 lead late in the second half.

Having taken a 1-0 lead in the first half thanks to Winks, Southgate’s men had to wait until the 79th minute to double their lead.

After a cross from Sterling was shanked into the air by a Kosovo defender, the ball ended up at the feet of Kane at the back post, as the England man slammed home to surely wrap up all three points for the away side.

He just cannot stop scoring at the moment!