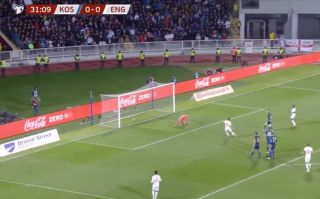 Harry Winks scored his first ever England goal this evening, as the Spurs man applied the finishing touch to a fine team move from the Three Lions as they took a 1-0 lead against Kosovo.

England need some sort of result from today’s game to cement their place at the top of their Euro qualifying group, with Southgate’s men taking a large step towards doing so thanks to Winks’ goal in the first half.

Some fine passing play from the Three Lions ended up with Oxlade-Chamberlain feeding Winks, whose brilliant first touch allowed him to get clean through on goal before the Spurs man slotted home in style.