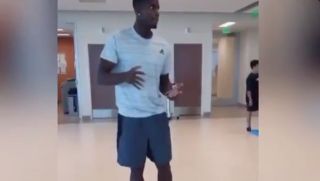 Paul Pogba has given Man United a bit of hope regarding his fitness levels, after the Red Devils midfielder posted a video of himself working in the gym as he works his way back from injury.

Pogba has been out for some time after picking up an injury against Leicester back in September, with the Frenchman playing just once for the club since then.

Pogba working hard ahead of his return from injury ? pic.twitter.com/QJqGUEUbQT

Although now, it seems like the French international is nearing a return from injury after he posted a video of himself working in the gym in the US.

Seems like Man United fans won’t have to wait too long before they get to see Pogba back in action once again!