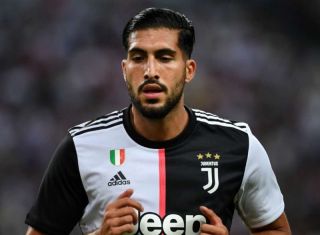 Unhappy former Liverpool central midfielder Emre Can has spent most of his time on the Juventus bench this season under new boss Maurizio Sarri.

The World Cup winner for Germany started Juve’s most recent game in a 1-1 draw against Bianconeri but has only managed to make the bench three times for the Turin side this season, as opposed to the 29 he made last year, as he helped the Italian giants to another Serie A title.

With Sarri omitting the midfielder from his Champions League squad, the former Chelsea boss is now said to be willing to let Can leave this coming January transfer window, according to Goal.

With his apparent desire to play consistent football week in week out, clubs such as Manchester United are now claimed to have emerged as potential suitors. Goal report that the Red Devils are planning to launch a bid around the region of £35 million (€39 million) for the former Liverpool man.

Speaking to Kicker, as quoted by Mirror Sport, the German midfielder vented his frustration stating that he is “not playing games from the start, so I’m not happy, but I will stay strong and keep working on myself”.

Despite his frustration with his lack of game time for Juventus, Can further stated that he still has the desire to “compete at the highest level”.

Juventus are back in action this Saturday away to Atalanta.