Lee Dixon is of the opinion that the absence of Aymeric Laporte is the biggest factor as to why Liverpool are ahead of Manchester City right now.

The Frenchman was sidelined for several months after sustaining a knee injury during a Premier League match against Brighton and Hove Albion back in August. Since then, Manchester City have conceded ten goals in the eight league games that have followed. They lost three matches including one against Liverpool and are currently fourth in the Premier League table, nine points behind the Reds.

Dixon feels that Laporte’s absence is a massive reason why Manchester City are behind Jurgen Klopp’s side. As quted by the Mirror, the pundit and former Arsenal legend said: “I’m trying to put it down to one thing, I would probably say Laporte getting injured for me is the biggest factor. I think he is a brilliant defender, I think he holds down that left-hand side of the defence, whoever is playing at left-back he can kind of control that side of the pitch and obviously his centre-half on the inside. So that’s a big area of pitch to replace somebody.

“You can put a body in there and I think that’s been a problem at centre-back as is well-documented, with Fernandinho going in there who’s a brilliant footballer but he’s not got that sixth sense of somebody just nicking in-behind him off his shoulder. The amount of times you go ‘they’re in position’ but somehow someone gets in, the little ones around the corner are difficult to deal with, especially around the box.”

Laporte’s absence has been a massive blow for Manchester City so far. In his place, Guardiola has fielded Fernandinho who is normally a defensive midfielder. The Brazilian has done fairly well so far but hasn’t been as convincing as Laporte.

Manchester City’s next Premier League match is against Chelsea at the Etihad and they’ll hope to secure all three points to move up in the table. 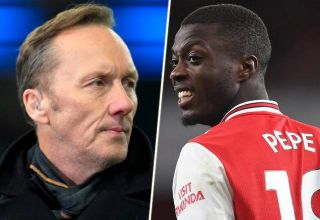