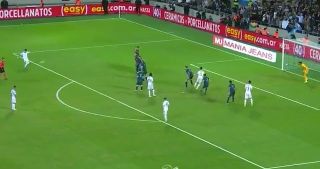 The stars were out for Argentina’s friendly with Uruguay on Monday but Luis Suarez produced a moment of magic to steal the limelight.

Edinson Cavani had given his side the lead after 34 minutes, only to see Sergio Aguero level things up just after the hour mark.

However, it didn’t take long for Uruguay to regain the lead as just six minutes later, Suarez stepped up and produced a superb free-kick to put them 2-1 up, as seen in the video below.

The Barcelona forward got just the right pace and dip on it to give Argentina goalkeeper Esteban Andrada all sorts of problems between the posts, and he simply couldn’t keep it out.

With club teammate Lionel Messi so often taking set-pieces and delivering pretty regularly for the Catalan giants, it appears as though he could have some competition when they line up next time as Suarez will be itching to produce another beauty like this one…