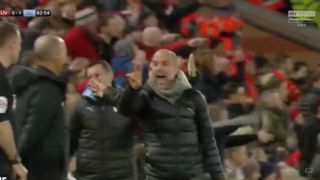 Liverpool posted a seemingly innocent image of youngster Harvey Elliott on their Twitter page but many fans believe it was a cheeky dig at Pep Guardiola.

The Manchester City boss was left livid prior to the international break as his side suffered a 3-1 defeat to Premier League title rivals Liverpool at Anfield.

One of the lasting images of the encounter was of the Spanish tactician screaming ‘twice’ at the fourth official as his side were denied two handball claims as he simply couldn’t keep control of his emotions.

Given what was at stake and having now fallen nine points adrift of the Merseyside giants, there is no doubt that key decisions were going to lead to emotional reactions from both sides.

With that incident in mind, Elliott was pictured putting up two fingers to the camera during a Liverpool training session this week, as seen in the club’s tweet below, and it appears as though many Reds fans believe that he was having a cheeky swipe at Guardiola rather than making an innocent gesture.

It surely wasn’t his attempt at replicating Guardiola’s gesture, but the fans below are certainly loving the idea that it was as the 16-year-old continues to try and make a positive impression on the Liverpool faithful on and off the pitch this season.

Where have I seen this before ?