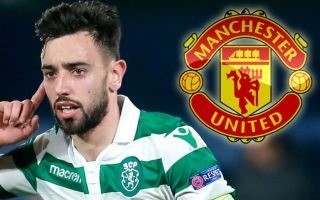 Manchester United and Tottenham may be interested to see fresh reports that Bruno Fernandes could be on his way out of Sporting Lisbon in the January transfer window.

The Portugal international has shone for Sporting in recent times, looking like a world class attacking midfielder in the making and one who could do well to move to a more competitive league.

O Jogo, with translation and additional information from the Daily Mail, report that Sporting’s financial woes now mean Fernandes could be cleared to leave the club this winter for a fee of around £65million.

The Mail note that Man Utd were interested in Fernandes in the summer, and this development surely gives them a fresh opportunity to strengthen their options in the middle of the park.

The 25-year-old looks like he’d be a major upgrade on the likes of Juan Mata and Jesse Lingard in that attacking midfield area, and perhaps even on the inconsistent Paul Pogba, who has also had a number of injury problems this season.

The Mail claim, however, that Tottenham also look likely to be in the running for Fernandes as they want him to replace Christian Eriksen, who is nearing the end of his contract at Spurs.

Fernandes for £65m looks potentially like a superb signing for either club, and both teams could really do with a deal like that to lift the mood after poor starts to the 2019/20 season.