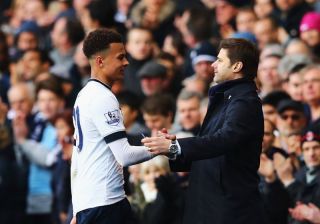 After Tottenham confirmed the exit of Mauricio Pochettino on Tuesday, Dele Alli sent his now former manager a touching message on social media.

The 23-year-old undoubtedly benefited from the Argentine tactician’s help with his development since joining Spurs in 2015, as he has emerged as a pivotal figure for the Premier League giants while also earning 37 caps for England.

In turn, he will feel a great deal of gratitude towards Pochettino for what he has done for his career, but after Tottenham confirmed his departure on Tuesday in their official statement, the search now begins for chairman Daniel Levy to identify the right successor.

However, Alli was keen to address Pochettino’s departure on Tuesday night and became the first Tottenham player to break the silence following the announcement.

As seen in his tweet below, it was undoubtedly an emotional and classy gesture as he thanked Pochettino for what he has taught him and done for his career and while wishing him good luck, he perhaps dropped a hint that he would be keen on a possible reunion further down the line.

Time will tell whether or not that materialises as much will depend on whether or not Alli remains a pivotal figure for Spurs under their next boss and where Pochettino goes after this.

Nevertheless, while Tottenham undoubtedly impressed last season to reach the Champions League final, they find themselves down in 14th place in the Premier League table after 12 games, and given that Levy specifically mentioned their poor domestic form in his statement above, it seems as though that has effectively been a huge factor behind the decision to sack Pochettino.

As noted by BBC Sport, Jose Mourinho is said to be a candidate to now step in and fill the void at Tottenham, although for now Alli was keen to focus on his former manager rather than look ahead to who will potentially replace him.

I can’t thank this man enough. He’s taught me so much and I’m so grateful for everything he’s done for me. Good luck and hope to see you again my friend. pic.twitter.com/dUO6AJlMxR