In goal, the former England international opted for Sheffield United goalie Dean Henderson. The 22-year-old Manchester United loanee has kept five clean sheets in the Premier League so far which is the joint-most.

In defence, Shearer picked both of Liverpool’s full-backs Andy Robertson and Trent Alexander-Arnold. The duo have amassed a combined two goals and seven assists in the Premier League so far and we are bound to see more from them as the season progresses.

In midfield, Shearer went for Fabinho who has been terrific for Liverpool. Apart from his stunner against Manchester City, the Brazilian has been in fine form and could end up in the PFA Team of the Year if he maintains his good form.

Liverpool’s fourth player in this XI is Sadio Mane who has been arguably their best this season as of now. The Senegal winger has netted seven goals in the Premier League so far and is on the left-wing. On the right, Shearer picked the only Manchester City player in this XI which is Kevin de Bruyne. The Belgian just doesn’t seem to stop assisting with nine to his name so far while also scoring two goals.

Shearer’s attacking midfielder is James Maddison who has amassed four goals and two assists for Leicester City so far. In the striker department, the former England captain chose the top two scorers in the league so far who are Jamie Vardy and Tammy Abraham. While the former has netted 11 goals for Leicester City, the latter has scored ten for Chelsea.

Alan Shearer’s Team of the Season so far 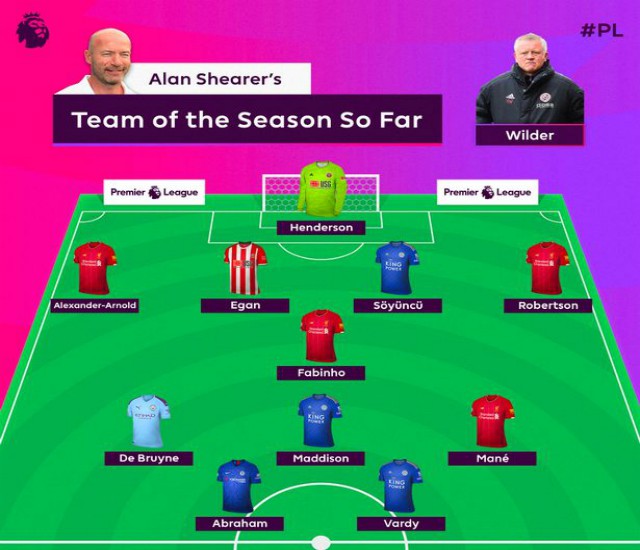 Shearer Team of the Season