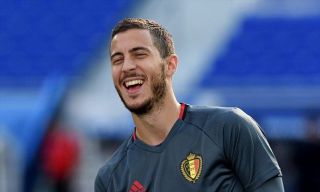 Former Chelsea talisman Eden Hazard has revealed that he’s enjoying seeing the Blues do well this season and hopes that they can maintain it.

After the Belgian international left this past summer to join Real Madrid and coupled with their transfer ban, many perhaps expected Chelsea to struggle this season.

In came club legend Frank Lampard and having given a number of his young stars a chance to impress, they currently sit in third place in the Premier League table after 12 games and are eight points behind leaders Liverpool.

Time will tell what they can achieve this year as they remain in the hunt for trophies both domestically and in Europe too, and although his start to life at Real Madrid hasn’t quite gone to plan for Hazard, he is seemingly still enjoying seeing Chelsea perform well without him.

“When I watch them, [there is] no Hazard but it is a party,” he is quoted as saying by the Evening Standard. “They can score a lot of goals, the fans are happy, they are third in the league, it is going to be a great season. They just need to stay there and win games. We all know Willian, Jorginho they are very good. Also with the young players coming through, it is great to see the club high and I hope they can stay there.

“It is not going to be easy [vs Man City]. The last time we played there we lost 6-0, bad memories for me and Chelsea. But this season they are really good, they are really young but really good. Why not go there and win the game?

Hazard was also asked if he would have liked to have had the chance to play under Lampard, to which he replied: “Yeah, of course.”

Time will tell whether or not there is perhaps a reunion further down the line, but Chelsea have seemingly moved on from Hazard and the Belgian ace will still be fully committed to making a success of his time in Spain and leading Real Madrid to trophies moving forward.

Nevertheless, it’s a nice touch for Chelsea fans especially to hear their former hero talk in such glowing terms of their impressive start to the campaign as it shows real class rather than bitterness that perhaps he’s missing out as Hazard clearly still hopes that they can be successful even without him in the years ahead.